What’s it all about?

Bands, banners and bright orange sashes used to be the order of the day.

Now in New Zealand its about friendship, fellowship and having a jolly good time celebrating the 12th July in New Zealand style with a family dinner for everyone. After all, July is in the middle of our winter for us.

The orange order of NZ was imported by protestant Irishmen back in 1843 , but the question is:

Is the orange order of NZ today still based on the same ideals now as it was back then?

The “troubles” as they are known in Northern Ireland are a typical Irish euphemism for intolerance and inequality, supposedly overcome in recent years but as the northern summer of 2013 shows, sectarianism is still a powerful social force in Northern Ireland.

Which brings us back to NZ?

As is usual with any immigrant newcomer to NZ, they join the NZ community, the NZ way of live and integrate socially by joining and marrying locals. NZ in general has a laid back, reasonably tolerant attitude to life and other people living in these lands.

The demographics of the modern Orange Order of NZ has obviously changed from the earliest times when Irish immigrants predominated. Nowadays it is the “locals” who make up the bulk of the order in NZ. Yet they still believe in the Order’s core values which are compatible with NZ’s attitude of tolerance and equality.

What exactly does the Order stand for? 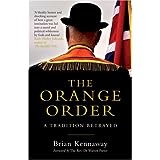 Kevin Flynn Review of the book The Orange Order: A Tradition Betrayed

By its own account it (The Orange Order) exists to protect the tenets of the Reformed Faith and to maintain Northern Ireland’s connection with the crown. Neither of these purposes can be construed as illegitimate or, given the reality of political allegiances, even unreasonable. It is the (Northern Ireland) Order’s clumsy, disrespectful and inappropriate expression of them that gets up people’s noses. Can Orangemen not recognise, for instance, that some of their marches reek of triumphal intolerance? The annual procession in commemoration of the Battle of the Boyne can be compared to the British Army insisting on marching through Paris every 18 June in celebration of its victory at Waterloo, its bands playing tunes that insult the memory of Napoleon and denigrate his soldiers. At the Boyne, good men fought on each side. Who could deny the courage and patriotism of Sarsfield, or that he too was fighting for religious and civil liberty?

Many find it difficult to see Orange marches as other than old-fashioned methods of dominance. They carry a subliminal message for Catholics: `We are your superiors. We know that you hate this demonstration of the fact. We dare you to do something about it: if you don’t, you confirm your inferior status.’ The swaggering braggadocio of the bandsmen appears designed to ensure that the message gets through.

Are Orangemen as bad as they are painted? Of course not (my italics). To most of them and their families Orangeism represents a way of life. The local lodge provides conviviality and companionship; its rituals have a meaning and rhythm that tap into the wellsprings of their faith. Its halls are often focal points for local communities and serve as venues for a range of gatherings other than those strictly Orange. The lodges frequently raise money for charities and often provide welfare services for members who suffer bereavement, illness or hardship.

Crucially, membership of a lodge can give a sense of `belonging’–an important factor in a cold, technological age when many working-class people feel increasingly alienated and rejected. This social aspect of Orangeism has been seriously neglected by historians and sociologists, who prefer to concentrate on the overtly political or religious.

“The Orange Order: A Tradition Betrayed” by Brian Kennaway

This review was describing the Irish arm of the order. In NZ the Grand Lodge has guided the Orange order down a clear path of tolerance and equality.

In NZ the practice of marching  has long gone as being irrelevant to our society. The 12th of July  is however still remembered as an important social gathering in NZ. As it’s our winter time, a warm homely dinner indoors is a highlight of the year.

Are you feeling isolated and cut off from your community?

Membership of a lodge in NZ does give a sense of `belonging’. The social aspect of Orangeism is extremely important and carries on the traditions of the “friendly societies” which have unfortunately fallen out of favour over recent years.

In the current cold technological age the options available for socialising are very limited beyond the pub and the movies. In this light the Orange still has significant relevance today.

The Orange Lodge is all about re-establishing the community feeling that has almost disappeared because of the modern overwhelming technology environment which tends to isolate people.

Very few people nowadays even know who their neighbors are, the sense of community has almost disappeared.

For a no obligation discussion on whether you think the orange Lodge could get you back into a friendly and concerned community enter your details now.